Skip to content
MyBlocker products provide Peace of Mind for less than $1 per day.
Over 100 million MyBlocker units used worldwide!

This page will address the misconceptions regarding the safety, effectiveness and use of chlorine dioxide products.

One study is from the The American Council;  the communications organ of the $526 billion enterprise known as the chemical industry. It represents an economic force that employs 529,000 skilled professionals and provides over 4 million related jobs.

Here are some excerpts from its article on Chlorine Dioxide:

Given that Chlorine Dioxide is routinely added to drinking water, sprayed on food, used in tooth paste and mouthwash and is an approved ingredient in over-the-counter and prescription drugs, the media-generated hysteria that chlorine dioxide is “toxic bleach” is easily refuted.

The active ingredient in Clorox (a household bleach solid in the USA) is sodium hypochlorite. One of the two ingredients used in the process of making chlorine dioxide is sodium chlorite  – a completely different compound.  Another compound with a similar sounding name is sodium chlorine, which also may sound “toxic” to the misinformed is a table salt.

All three substances are made of sodium and chlorine atoms, but it is inaccurate to conclude they are similar compounds. They are different!

This video explains the chemistry of chlorine dioxide and its unique anti-bacterial, anti-viral and anti-heavy metal properties as well as its safety.

Yes, it is safe.  Hopefully, you already read MyBlocker does not contain bleach or other toxic elements.  MyBlocker safely emits Chlorine Dioxide at a low concentration rate of .03 Parts Per Million (PPM).  This is 70% below OSHA’s daily Permissible Exposure Limit of .10 PPM.

For example, most people are familiar with Tylenol.  At a very low dose, Tylenol does almost nothing noticeable in the human body.  However, if an adult takes 325 mg of Tylenol for a fever or headache, they may notice a pain-relieving, fever-reducing medicinal effect. That same person who experienced relief from fever and headache at 325 mg may die if they take 12 times that amount (3,250 mg) within a 24 hour period.  Consequently, even Tylenol is dangerous if the doses are too high.

In conclusion, MyBlocker is very safe at .03 PPM.  We have no association to the FAKE products from China that are trying to copy our technology.

Here’s a “raw” video that compares our .03 PPM rating versus the astonishingly high PPM levels of the fake products.  The video underscores the importance of supporting a company that understands chlorine dioxide and the importance of delivering a finished product that meets and exceeds government quality and safety standards.  OSHA’s Permissible Exposure Limit is .10 PPM.   My 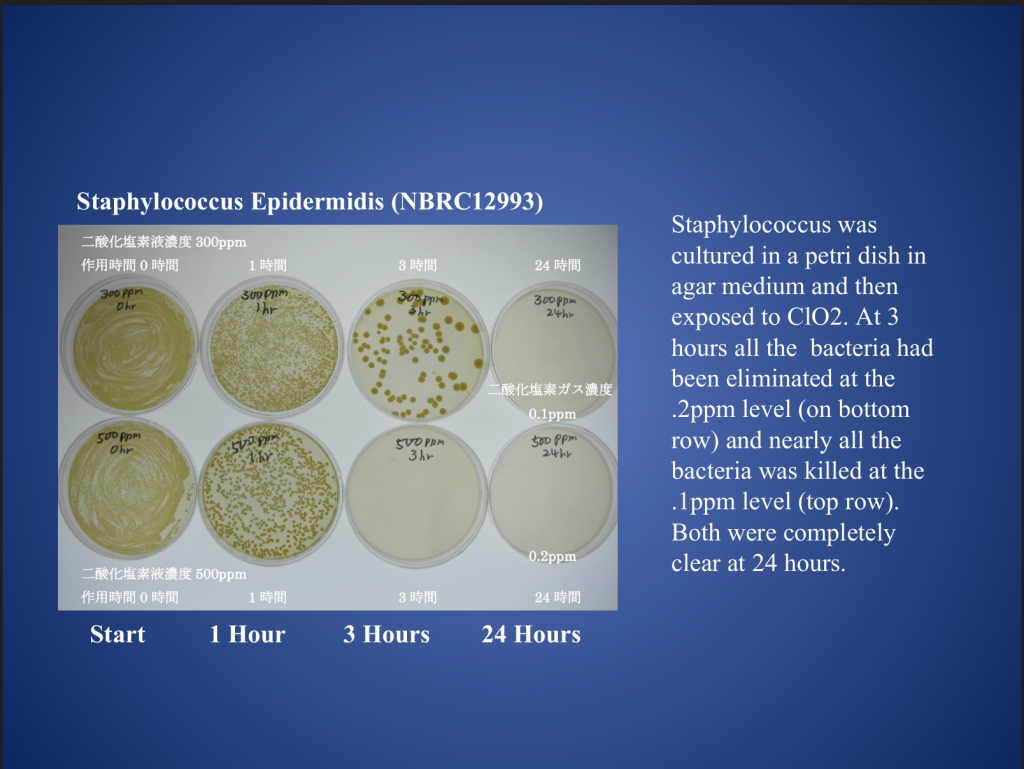 Scientific Evidence of the Efficacy of Chlorine Dioxide at .03 PPM.

Journal Of Occupational Medicine and Toxicology

CHLORINE DIOXIDE GAS FOR THE PREVENTION OF INFECTIOUS

Provided by the ATSDR

The patented MyBlocker™ is a wearable or phone attachable portable sanitizer and deodorizer that provides an extra layer of defense against viruses, bacteria, germs, and pollen anywhere you go: work, travel, sports events, in the classroom, or at social gatherings with family and friends.